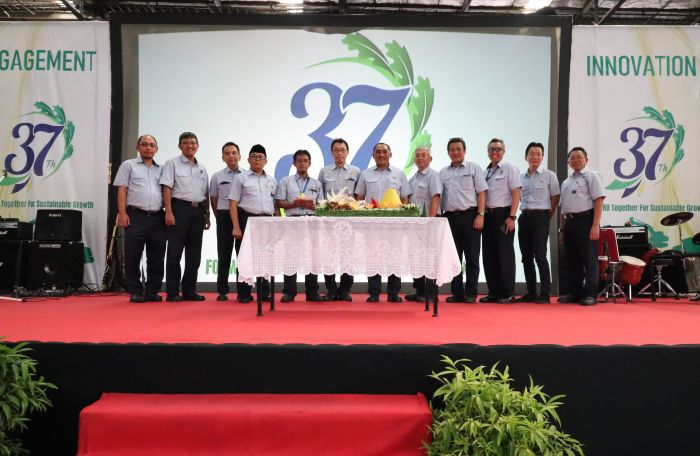 The peak of the 37th anniversary of PT Komatsu Indonesia (KI) held on Friday, 13 December 2019. Breaking the old traditions, the event began in the afternoon at the Assembly Plant that attended by all employees and invitees (Silver Expert KI).
This time, KI's Anniversary carried 'Engagement & Innovation' as the theme. The theme 'Innovation' had told in the speech of Mr. Pratjojo Dewo as KI President Director, where a video was played to educate employees that now KI has been moving towards into the industrial era of 4.0. The innovation has been seen by using the IoT (Internet of Things) application which consists of KIOSS, Komtrax, Maos, MQVS, Dantotsu Line, Online Check Sheet, Kwins and Tracebility applications.
While the ‘Engagement’ element is a continuation of the "Care" component of Komatsu 3C (Care, Commitment & Consistent). This could be seen from the involvement and team work of employees who worked hand in hand in preparing for and during the event, such as the distribution of consumption that requires employee cooperation, the holding of a fried rice competition between representatives of each plant, and a live performance band from KI Idol winners.
The awards also given by the company at this event, that is "going to Makkah" for free to loyal and highly dedicated employees, AKITO Award, QC Convention Award, 5K, KI Porseni, and so on.