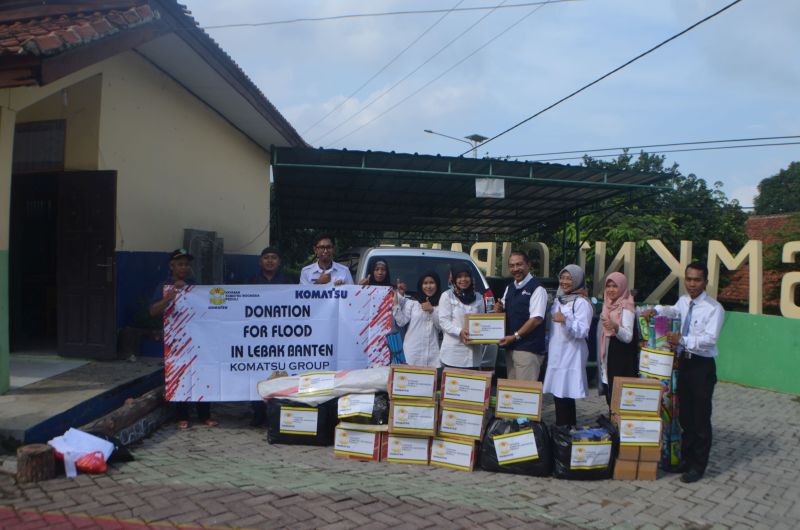 The new year 2020 began with heavy rains from 7 pm on Tuesday, 31 December 2019 which did not recede until 5 am on 1 January 2020. Rain that occured throughout the night caused excess drainage capacity that made industrial areas, offices and residential centers experienced in a big flood. On Wednesday morning, the media was filled with news of the floods that hitted Jakarta & Bekasi.
After collecting data, there were 246 of PT Komatsu Indonesia (KI) and outsourcing employees who were flooded  & 25 of them suffered by 1 meter of water depth in the house. Some employees' housing also experienced flood with a depth around 5 - 70 cm.
As an emergency response, KI provided volunteers (employees) and formed emergency posts in each flood area (total 6 posts). KI distributed cleaning tools, snacks, drinking water and medicines. The employees who had been given logistical supports are 149 KI employees (not including outsourcing), 71 employees of PT Komatsu Undercarriage Indonesia (KUI), 34 employees of PT Komatsu Marketing and Support Indonesia (KMSI), and 19 employees of PT Hanken Indonesia (HKI). These supports  were company's concerns for employees.
Beside Jakarta and Bekasi, flash floods also hitted several areas in Banten. As a form of Corporate Social Responsibility (CSR) that conducted by Komatsu Group in Indonesia through Yayasan Komatsu Indonesia Peduli (YKIP), we provided some donations which were distributed in 2 stages. The first phase was distributed on January 8, 2020 to two villages in Lebak Banten for approximately 200 flood victims. The aids were instant noodles, children's food, clothes for babies, children and adults. The second phase was aimed at Cipanas Banten area on January 16, 2020 through SMKN 1 Cipanas. The aids consisted of food, cleaning equipments, clothes, and praying equipments.